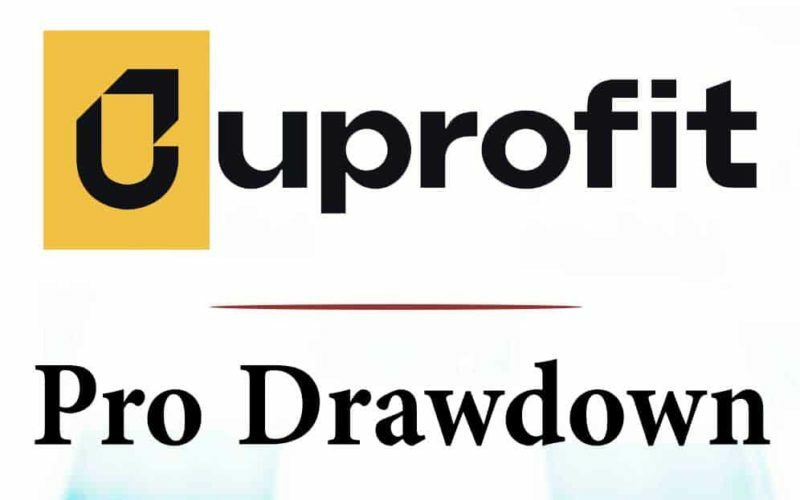 Drawdown generally signifies a decrease or reduction and when applied to financial markets, it pertains to the worst series of cumulative losses. In other words, it is the biggest drop from the highest point to the lowest point on the return curve.

Drawdown is mostly used by prop firms in their funded trading programs so that they can get a panoramic view of the maximum loss that a trader is capable of bearing. It also enables these firms to determine the volatility that a trader’s capital has experienced before achieving the ultimate objective.

What does a trailing drawdown mean?

A trailing drawdown can be defined as a stop loss that is assigned to a trading account and is continuously moving. It could also be used to refer to a moving value that determines the minimum account balance that a trader is allowed to have at any point of operating the trading account.

What does EOD drawdown mean?

How does the Pro drawdown work at Uprofit?

As mentioned earlier, the Pro drawdown at Uprofit works like the EOD drawdown which is why it only considers the profits made once a trading day comes to an end. Also, it is updated any time the trader’s account balance achieves a new high at the end of any trading day.

Uprofit adopts this method of calculating the drawdown to ensure that its traders can trade freely and make the most of the trading opportunities available. Traders can do this without worrying about a trailing drawdown that will consider both earned and unearned profits as the Pro drawdown only considers the profits earned at the end of the trading day.

Example of how the Pro drawdown works at Uprofit

For this example, we will assume the trader is trading with a 100K account with a Pro drawdown of $3,000. We will examine how the Pro drawdown is calculated for successive days of trading.

Day 3: the trader abstains from making any trades and so closes with the same balance from the previous day at $98,500 which means the Pro drawdown is still the same at $97,000.

From the above example, it is clear that the Pro drawdown does not consider the potential profits but only the actual profits at the end of the day.

Questions and answers about the Uprofit Pro Drawdown

When does the Drawdown stop trailing?

The drawdown stops trailing when the drawdown limit reaches the initial balance either in the challenge or in the funded account.

Will I lose my account if I reach the Pro Drawdown?

I didn’t reach the Pro Drawdown, but my account was liquidated! Why?

All the different account sizes have a daily loss limit assigned to them and traders are expected to abide by this rule. Sometimes, traders fail to pay attention to this rule and as such they find their accounts liquidated. The rule is there to ensure that traders are disciplined and adopt excellent risk management strategies.

Uprofit is one of the most straightforward prop firms out there and endeavors to make the process easy for traders to pass the challenge and get a funded account. The major thing that traders need to be aware of when dealing with Uprofit is the rules because they are crucial to a trader’s success.

The Pro drawdown is one of such rules which are meant to ensure traders maintain discipline while achieving the assigned target. Uprofit allows traders to monitor their Pro drawdown at the end of each trading day via the trading dashboard.

TradingFunder.com is reader-supported. We may earn an affiliate commission when you buy through links on our site. Learn more.

Financial Risk Disclaimer: Be aware that trading in the forex and futures markets includes a lot of risks; people may lose a lot of money while trading forex and futures. You must be well informed and prepared before starting trading forex and futures.
You must understand all risks before choosing one of the programs listed on our website.
We Are Not Financial Advisors Disclaimer: We are not financial advisors; all articles on our website tradingfunder.com are for informational purposes. If you need the help of a financial advisor, you must contact one outside our website tradingfunder.com.
Affiliate Disclaimer: Our website tradingfunder.com includes affiliate links that allow us to earn commissions when you purchase products via our links; those commissions are why we continue informing you about everything you need about prop firms.
Learn more about affiliate commissions.
Hypothetical Or Simulated Performance Disclaimer: CFTC Rule 4.41 – Hypothetical or Simulated performance results have certain limitations. Unlike an actual performance record, simulated results do not represent actual trading. Also, because the trades have not been executed, the results may have under-or-over compensated for the impact of certain market factors, such as lack of liquidity. Simulated trading programs, in general, are also subject to the fact that they are designed with the benefit of hindsight. No representation is made that any account will or is likely to achieve profit or losses similar to those shown.
Learn more about Forex and futures trading risk.